Grad student and aspiring documentary filmmaker Taylor Gentry (Angela Goethals, Home Alone) and her two camera men Doug (Ben Pace) and Todd (Britain Spellings) are following Leslie Vernon (Nathan Baesel) as he prepares to make himself a household name…in the field of slasher film style murders.  Yes, this is another mockumentary, this time set in a world where Michael Myers, Jason Vorhees and Fred Kreuger are real, coming back year after year to rack up insane body counts.  We follow Leslie as he lays out the methods that provided his “heroes” the aura of unstoppable, supernatural killing machines when they are actually just very dedicated, meticulously planning their killing sprees.

Leslie has a traditional backstory, the legend of a rural Maryland town of a boy “born evil” and thrown off a waterfall by an angry mob after murdering his parents.  Kelly (Kate Lang Johnson), a high school student and diner waitress, is his hand-picked “survivor girl”, the virgin who he hopes to usher through a traumatic experience that will transform her into an empowered fighter who alone can defeat him, or at least appear to.  Vernon’s “Ahab” is his former psychiatrist Doc Halloran (Robert Englund, Galaxy of Terror), who seeks to stop him.  Vernon rigs his parents’ former apple farm to prevent his victims flight or fight, bullet proofs and fire proofs his costume, and, as he stresses, does plenty of conditioning and cardio, which he’ll need to keep ahead of his quarry while appearing to expend no effort doing so.  As Taylor and her crew film Leslie’s preparations, the audience is left to wonder:  What is Leslie’s real plan, and how far is the crew willing to go to aid and abet the sometimes charming murderer?

So is he supposed to be one of those folk art shrunken apple headed dolls?

When Behind the Mask hit theaters in limited release five years ago, the slasher sub-genre was in another of its periodic low points.  Slasher films (and really, Hollywood genre films in general) turned to eating their own tail in the 2000s, with remake and reboot after remake and reboot from the majors, and independent theatrical horror distribution all but dead.  2006 saw two independent slasher films, Hatchet and Behind the Mask, attempt to revive the genre again, and each won support from very different camps within horror fandom:  Hatchet the low brow, meat and potatoes kind of fan, and Behind the kind of middle brow fan that sees itself as a discerning horror consumer, but what links them is a shared love of a rather disreputable genre.  While Hatchet was doomed to be a rehash, Behind the Mask features a good set up and a new approach to well-worn material.

Hatchet billed itself as the second coming of the glories of 1980s slasher films, a knuckle dragging ode to their blood, guts, and hooters, even going so far as to cast Kane Hodder as the murderer.  Hatchet is just what anyone dumb enough to think that Hodder is the “one true Jason” deserves.  Hodder joined the series in The New Blood, aka Friday the 13th Part VII.  Thinking of him as the “one true” anything is kind of like thinking that Glen Strange is the “one true Frankenstein’s Monster.” Don’t know who Glen Strange is?  There’s a good reason for that.  Hatchet wasn’t the return of the first (and in my opinion, best) wave of slashers, but the return of the tail end of the second wave, films made during the decline of the three major slasher film franchises.  These were films only compulsive Fangoria readers could love, where special effects, nudity and terrible jokes reigned supreme over suspense, atmosphere, actual scares, or common sense. 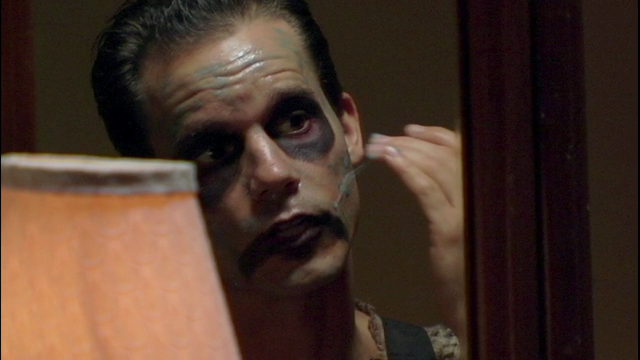 Having this guy look like a Juggalo without the mask is scary, but probably not in the intended way.

Behind the Mask takes a very different direction,  taking the slasher film someplace it (only rarely) went before, blackly comic mockumentary.  Indeed, to my knowledge the only film to trod this particular ground is the Belgian Man Bites Dog, which I’ve yet to see.  There are also short subjects (I’ve seen a few made locally), as well as some “found footage’ films, like the obscure Danny Bonaduce vehicle America’s Deadliest Home Videos, which feature documentary filmmakers and camera people accompanying spree killers and murderers on their rounds, typically in less comedic and more straight horror fashion.  The real novelty here, however, is not the comedy, but the notion that we’re going to see how slashers accomplish their “supernatural” feats. 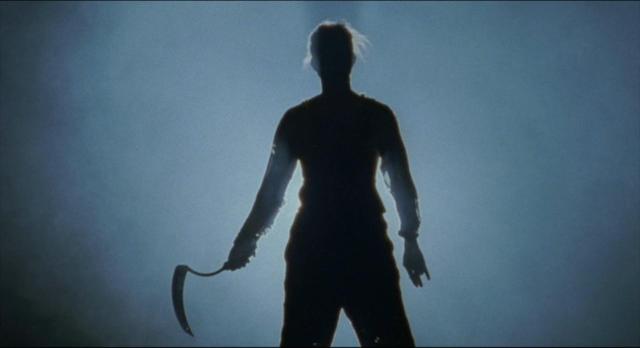 It’s about this time I queue up the fog machine jokes, or, alternately, say “MADMAN!”

At first glance this seems like a winning premise, a Halloween for the age of the reality show “star” and the internet sensation, and, indeed, Behind the Mask received its fair share of buzz among critics and horror bloggers upon its release.  In direct contrast to the idiocy of Hatchet, director/co-writer Scott Glosserman and co-writer David J. Stieve seek to send up rather than recreate the excesses of slasher films past. They aren’t aiming for the “boobs and blood” crowd as much as the amateur critic/film student one, including plenty of references to the symbolism of slasher films, using terms like “survivor girl,” (clearly meant to echo Carol J. Clover’s “final girl” concept), “Ahabs”, and so on.

“You are what the French call “Les Incompetants!”

This is one of the key areas where the film goes wrong.  Leslie’s reliance on the grammar of film criticism to explain his work doesn’t make a lot of sense.  Why, exactly, is this the grammar of these “real world” slashers?  Why should Leslie care about the symbolism of what he’s doing?  It could be that these slashers are some kind of outsider performance art, or are a cult of people seeking to bring out the best in man by providing evil to struggle against, but the film doesn’t explore that idea or try to explain it in any way, just mentions it in passing.  The real reason for the film criticism speak is to allow literate horror fans to chuckle and feel clever; it’s neither funny nor does it add to any scares, it’s simply there to ensure that Behind the Mask will have a built-in audience and good word of mouth. 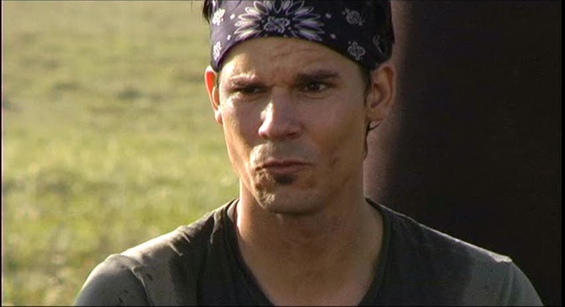 It might have been more interesting if Vernon was just an obsessed, but extremely inventive, horror fan trying to recreate his idols, though that would hew a bit too closely to Scream.  Instead we need to accept the idea that slashers speak film critic. With a series of short scenes of Taylor talking over footage of Crystal Lake, Haddonfield, and Elm Street (with more nods at fans including Kane Hodder appearing as a resident of Elm Street and a quick flash of the sign for the Red Rabbit of Halloween matchbook clue fame), we’re quickly introduced to the premise that the slashers of horror films are all real.  How would any amount of tricks explain what happens in even the first Elm Street film?  More importantly, why would anyone seek to emulate the villains of those films?  The answer could be compelling, terrifying, or funny, but mostly Behind the Mask dodges the question.  Leslie Vernon does have that tragic back story, but Doc Halloran exposes it as a fake; Leslie’s real last name is Mancusco (in one of the films many call backs to earlier films, Macusco was the name of the producer of Friday the 13th), although presumably if he really was Leslie Vernon a name change and move to another part of the country wouldn’t be out of the question.  Vernon thirsts for fame (or at least infamy) and recognition, but we’re never given anything more revealing than the default (and obligatory) reality show contestant talk of achieving your dreams. 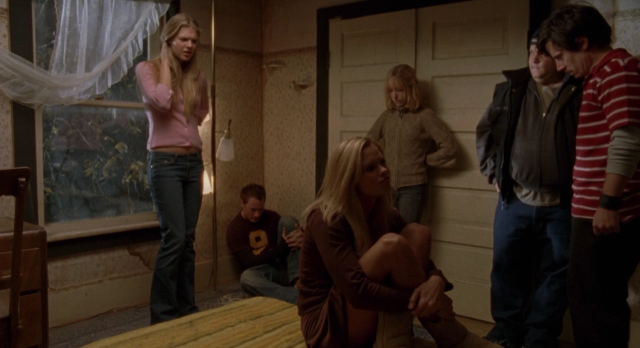 I was rooting for the guys on the right.

One might have previously assumed that slashers burn out fast and brightly, but Eugene (Scott Wilson of In Cold Blood), Leslie’s mentor, is retired and living nearby with  beautiful younger wife Jamie (Bridgett Newton), an implied “Survivor Girl.”   How exactly does a slasher retire, much less comfortably?  Answers to these questions would be far more interesting than the generic slasher stalk and kill that takes up much of the third act.  The character of Taylor doesn’t make it any easier, as she spends most of the film entranced by the charming Vernon, then changes heart at the last-minute, growing a conscience and allowing Behind the Mask to become a more standard slasher film, literally, as Behind the Mask abandons the documentary footage angle entirely to give us conventional stalk and kill scenes.

Just once I want the librarian to be a guy. Or a nondescript younger woman. Also, that’s Zelda Rubenstein of Poltergeist fame.

The production is reasonably polished for a low-budget effort.  One scene that shows the film’s full potential: Robert Englund makes a grand entrance as Doc Halloran, in a dead on impersonation of Donald Pleasence in Halloween, arriving just in time to save Kelly, while Leslie jumps around trying to adjust.  Unfortunately, this scene has no impact on the events; Kelly forgets it there isn’t any evidence that the police or townspeople respond to the return of Leslie Vernon.  This kind of missed opportunity and film reference for film reference sake are what really hurts the film in the end.  Baesel does a fair job of being likeable and upbeat about horrific things while giving us glimpses of the rage underneath his exterior, but we’re left with frustrating hints of what Vernon could be, Norman Bates as reality show contestant.  Goethals is fine in a thankless role, alternately falling under Baesel’s sway and becoming a more typical slasher film character when the film requires it.

As a comedy Behind the Mask is for film buffs only, and even then it’s not quite as funny as it thinks it is-this is no Sean of the Dead or Hot Fuzz, simultaneously hilariously send ups of the conventions of a genre and excellent, if absurd, examples of them.  We’ve seen the rules laid out and then manipulated by horror films before (indeed, watch Arsenic and Old Lace sometime if you really think that breaking the fourth wall and calling suspense stories out on their most ridiculous conventions is novel) and while Behind the Mask offers a new wrinkle, it never capitalizes on the potential of its best ideas and ultimately slides into slasher film predictability.  That being said, you could do far worse in a sub-genre with famously low standards; in comparison to uncreative,  brain-dead rehashes like Hatchet and uninspired remakes that dumb down and defame cult classics, Behind the Mask is at least trying, and if it doesn’t fully succeed in breaking new ground, it’s still a reasonably entertaining attempt to do so.  Who knows, perhaps the upcoming sequel will expand Doc Halloran’s role and make something of the hints dropped in this film.

4 comments on “Behind the Mask: The Rise of Leslie Vernon”