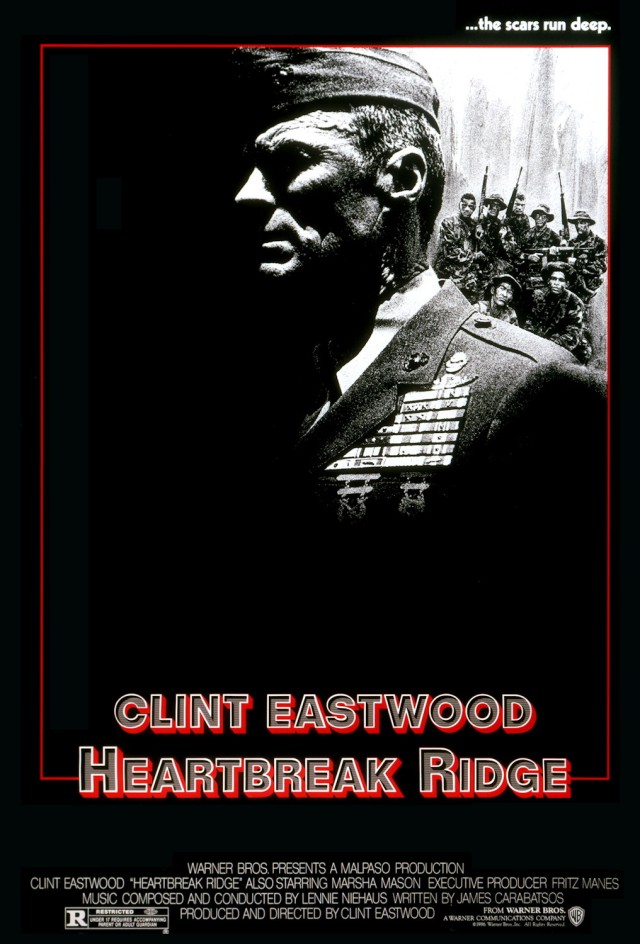 What It’s About:   Marine Sergeant Thomas Highway (Clint Eastwood) transfers back to his old unit after he is arrested on a drunk and disorderly charge.  Highway is assigned to a Recon platoon full of slackers who think they’re too bad ass for the traditional training routine.  After a long battle of wills, Highway whips the platoon into shape, winning their respect and loyalty in the process. When the call to action comes will Highway’s hard work pay off?

Why Watch it Today?:   The events Heartbreak Ridge is based on actually involved Army Rangers, but the Army refused to participate in the making of the film.  The Marine Corps, always hungry for publicity, stepped in, and Highway and his men were rewritten as Marines.  If there’s one thing my father, who served in the Marines in the early 1960s, loved, it was anytime the Marines stole the thunder from another branch of the service, especially the Army.  Heartbreak Ridge was one of my dad’s favorite flicks.  In addition to that back story and the obvious appeal of Clint Eastwood‘s acting, production and direction, Pops Mortis enjoyed seeing Marine Recon appear in a film after years of movies featuring Army Rangers, Army Special Forces, and Navy Seals.  He maintained that Gunny Highway was closer to the sergeants he’d known than those in other films (were he still with us I would advise you to avoid watching Full Metal Jacket with the man, unless you enjoy hearing someone complain about a movie while you watch it). The U.S. Marine Corps was established today in 1775, so why not take my father’s recommendation and watch Heartbreak Ridge in celebration.

Where to Get It:  Watch online at iTunes, Netflix, or Vudu or borrow it from your local library

Mo Rating for Movember: Clint Eastwood is not known for his facial hair, and Heartbreak Ridge is no exception, with only minor characters sporting ‘staches.  1 out of 5 Mos.