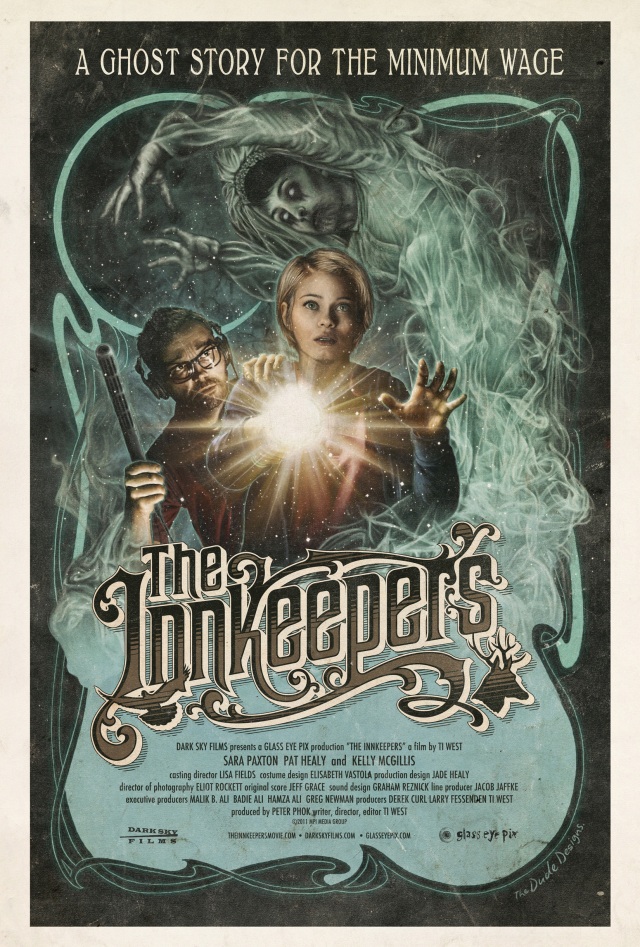 The Yankee Pedlar Inn, an old New England inn that some say is haunted, is about to shut down forever. Its owner is away on vacation and only two employees, Claire (Sara Paxton, Aquamarine) and Luke (Pat Healy, Ghost World), remain. With a handful of guests remaining, Luke and Claire pursue a side project: capturing evidence of the spirit that haunts the Inn. What will they find? 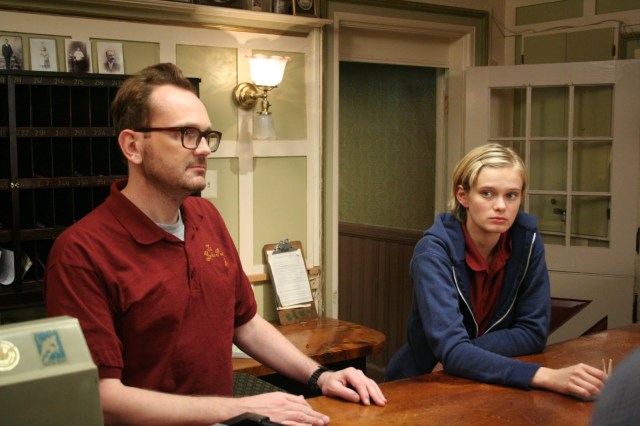 Our heroes, ladies and gentlemen

Mister Invisible and I watched this one together recently. What did we think of it? Read on:

Claire demos a more effective way to tell this story

Mortis: Plot wise this is straight up ghost story anthology/camp fire tale stuff. What really sets The Innkeepers apart is that it is another Mumblecore horror film from director Ti West. As I understand it, Mumblecore films feature unknowns or amateur actors in their 20s to early 30s, low budgets, real locations and a focus not on plot but on the relationships of characters. Fifteen to twenty years ago, before the label had been completely divested of meaning, this would be considered “Indy”; in any case that’s exactly what we have here.

Mister Invisible: Definitely a ghost story and not a horror film. I kept waiting for the plot to materialize. It eventually does, but again it’s the characters and their interactions that are the apparent focus here.

Mortis: We kept waiting for the plot to come to a full boil-I remember at the end Mister I was convinced that another shoe was going to drop, possibly involving the absent owner. The twist never came.

Mister Inviz:
The characters nearly play this off as Clerks meets Ghost Hunters, which based on the loose definition would definitely fit the “mumblecore” vibe. I couldn’t help but start humming “Take My Breath Away” every time McGillis came on-screen.

Morty: The Clerks comparison is dead on, though it has fewer conversations about geek culture and no comedic monologues. Depending on your tolerance of Kevin Smith that could be a good thing.

McGillis, the muse who made Inviz sing while she made Morty come to grips with time and mortality

Inviz: The set pieces are very strong and truly capture the “Yankee” style you’ll see all over New England. Ti West basically doesn’t mess up his shot framing in this authentic environment.

Mortimer: Like Ti West’s other films, very spare and straightforward, with a bit of a TV vibe, which fits the characters Ghosthunters aspirations. I’ll bow to Invisbo’s judgement on the “Yankee”thing…as someone who’s never spent more than a month outside of New England I don’t have the perspective. One thing that left us scratching our heads was the laptop Luke uses and the look of the website he created…very late 1990s, which made us wonder if they were a comment on his skills/means or if this is set ten years ago.

Mortis: Not many jump scares; West doesn’t build any atmosphere or suspense either. There are a few stand out moments but the most terrifying thing you’ll see is Luke in his tighty whiteys.

Inviz: Sadly, the best jump scare is a pretty lame gag in retrospect. Otherwise the film isn’t scary as much as it is fun to have it told to you, like most ghost stories.

Should You Go See It?

Mortis: I don’t recommend it unless you are a Mumblecore and/or Ti West fan. The House of the Devil is a better first Ti West film.

Inviz: I would recommend waiting for it to hit cable or Netflix streaming some day. 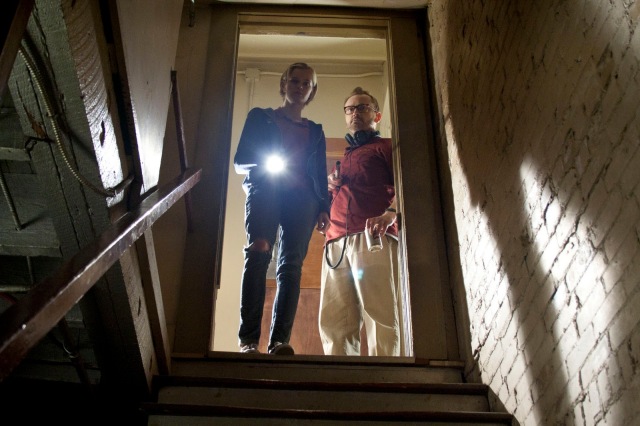 Coming to theaters on February 3rd, 2012; also available now via Amazon and iTunes.