About ten months ago, I posted a rant about Captain America:  The First Avenger.  Wednesday night I watched The Avengers.  I was having trouble coming up with anything meaningful to say beyond:  go see it if you haven’t.  Chances are, if you like superhero movies at all, you’ll enjoy it.  I watched David DeMoss’s review over at And You Thought It Was Safe…? and I nearly wrote a post that just said to go watch *his* review, because he *mostly* agrees with me, and put in the effort to actually put it in words, probably more coherently than I would have.  Job done.  Then I realized:  Hey!  I’ve got a rant from ten months sitting around.  I wonder if this film answers it?  So here we go: 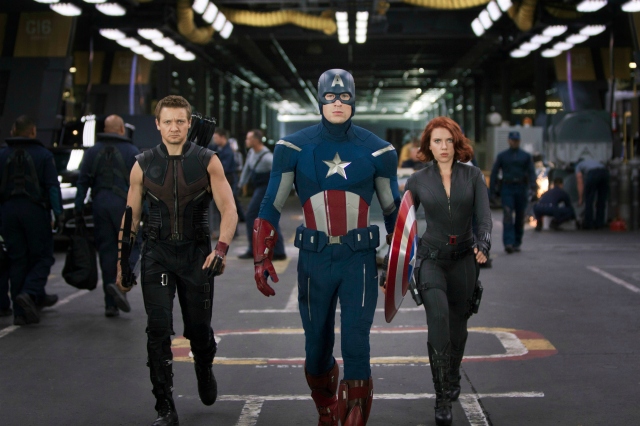 Superhero  movies have done this more and more, little nods to the comic fans that constantly take you out of the option and make you think things like “Hey!  That’s the original Human Torch in that tube!”  Admittedly this film features a ton of comic characters, but most have the benefit of being introduced in previous entries in Marvel’s recent superhero films, and they don’t feel crammed in. They all get good things to do, good character moments.  They’re not here just to please the fans, they tell a story.  If there were a lot of little references to comics continuity, I missed them; I was having too much fun with THIS movie to think about it.  This is the way, Hollywood, to integrate comic history-not little splashes here and there, just take the best elements and use them!

Well, that specific issue wasn’t present here; but I did feel that the characters behaved in the range that those character behave in the comics.  Loki was a lying, twisty git who has other people do his heavy lifting for him and who continually causes conflict.  Yep.  That sounds like Loki.

Again, I was too busy enjoying myself to notice, but I feel like the CG was at an acceptable level; for most of these characters and situations it is a must.  That being said, I’m not sure if it was better, or the mix was better, or you just notice lame effects less when you’re fully engaged, but I barely noticed with a few exceptions.  More on the point I was making before, there’s a minimum of use of CG to make the mostly human members of the Avengers do things that are just completely impossible.

I always went for brunettes, but maybe when it comes to guys I dig blond?

Anything else to say?  Not too much.  I loved Chris Evans as Captain America, he was the embodiment of my favorite version of Cap.  Robert Downey Jr. continues to be hilarious as Tony Stark/Iron Man, and we didn’t get treated to the barrage of moments that remind us that playboys retained a modicum of class that is absent in the Maxim era like we were in Iron Man 2.  I was skeptical of Mark Ruffalo as Bruce Banner; I was glad to be proven wrong.  I’m not even a fan of the character and I’d like to see a solo Hulk film with him in it.  I was a little disappointed we didn’t see much of Thor, particularly of Hemsworth’s comedic side (submerged to make RDJ the big comic relief of the film, I’m sure), and the version of The Black Widow and Hawkeye that the film is using are not my faves, but these are minor complaints, to be sure.

Which brings us back to:  go see it if you haven’t.  Chances are, if you like superhero movies at all, you’ll enjoy it. I know I did.