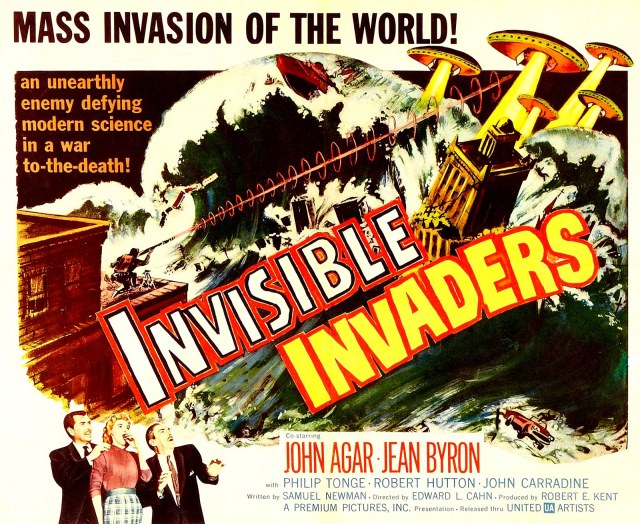 What It’s About: After atomic scientist Dr. Karl Noymann (John Carradine) dies in a lab accident, a strange thing happens:  he shows up, alive, on the doorstep of his colleague Dr. Penner (Philip Tonge).  Noymann explains to Penner that he’s actually an invisible alien possessing Noymann’s body, and he’s here to deliver a warning:  if Earth doesn’t stop developing nuclear weapons, his moon-based race will possess the bodies of our dead and make war on Earth.  Penner delivers the message, but he’s laughed at, at least until the aliens possess a plane crash victim and pilot him to the announcers booth at a hockey game, where he again delivers the Earth another ultimatum.  International authorities decide to fight back, and the invaders make good on their threats, using the bodies of the dead to commit acts of sabotage and destruction.  In response Earth gathers its top scientists in secure locations to try to find a way to defeat the aliens.  Air Force Major Bruce Jay (John Agar) escorts Penner, his daughter (Jean Byron), and her fiancé, Dr. John Lamont (Robert Hutton) to a bunker designed to survive a nuclear war.  Can anyone find a way to stop the Invisible Invaders?

Why Watch it Today?: Star John Agar, one of the patron saints of bad movies, was born today in 1921.  Agar’s first break in Hollywood came the old-fashioned way:  he married into it.  The wife in question was none other than an all-grown-up Shirley Temple.  Agar started at the top, appearing in the John Ford’s “Cavalry” pictures and The Sands of Iwo Jima, then found a niche playing lead roles in sci-fi and horror films before finally fading into character parts.  Agar’s wooden acting and sub-matinee idol looks kept him from the A-list, but in his better B-films, Agar is an acceptable, if goofy, lead, while in the worst his terrible acting actually adds to the proceedings.  Invisible Invaders, an influential but goofy stop along zombie films journey from plantation potboilers to cannibalistic apocalypses, belongs in the latter category, featuring Agar as a hard-headed soldier tasked with keeping scientists safe long enough to save the world.  You can read our full review here.

Other Choices:  Agar has major supporting roles in Fort Apache and Rio Grande, and is the lead in Tarantula, and The Brain From Planet Arous.