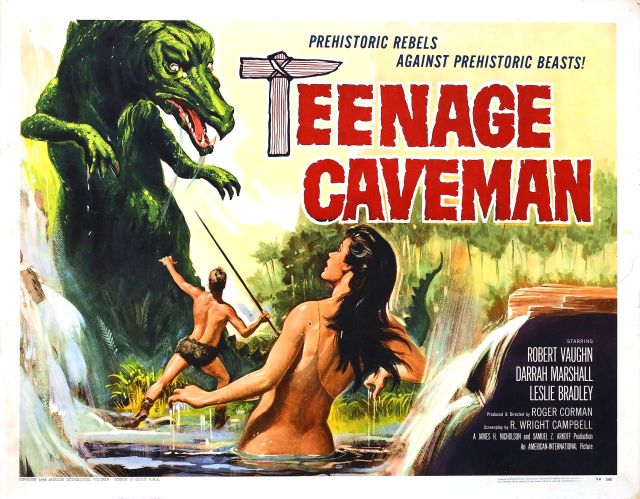 What It’s About:  The teenaged caveman (Robert Vaughn) is the son of the Symbol Maker (Leslie Bradley).  The Black Bearded One (Frank DeKova), a staunch traditionalist, watches the Symbol Maker and his son closely because both question the laws of the tribe.  As the teenaged caveman tries new things, he creates new tools (pan pipes and a bow and arrow), and fights “prehistoric” monsters, but what will happen when he learns the secret of “the one who kills with a touch”?  Can he escape the wrath of the tribal elders?

Why Watch it Today?: Director/producer and exploitation film giant Roger Corman turns 87 today-a Happy Birthday to a man who has brought fans of horror, sci-fi, trash and the weird in cinema so much joy over the years!  Teenage Caveman is classic early Corman, made extraordinarily cheaply, but containing an idea that would show up again and again by later films.

Other Choices: The Masque of the Red Death; Attack of the Crab Monsters;  and many more.