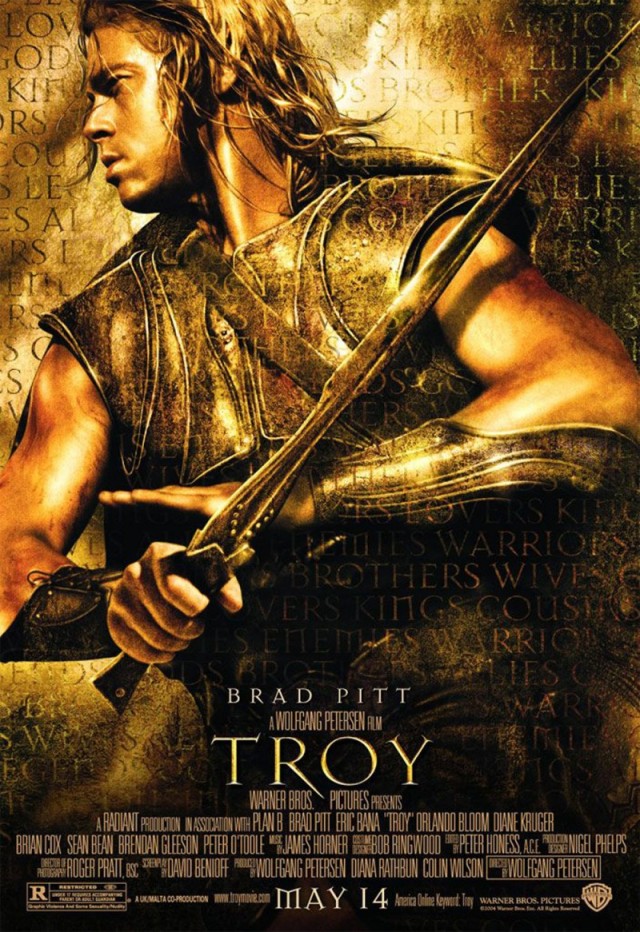 What It’s About: A glossy, somewhat empty-headed retelling of Homer’s epic The Iliad.  The gods, who are some of the most interesting characters in the original epic, are edited out (with the exception of Julie Christie as a vaguely crazed Thetis), probably to avoid turning the movie into Clash of the Titans II.   Peter O’Toole as Priam brings the most authentic gravitas; Orlando Bloom is suitably annoying as Paris; Sean Bean preserves some level of dignity as Odysseus; and Brad Pitt sports a wardrobe that prominently features body oil and a midriff top.  (The film was nominated for an Academy Award for costume design.)  It’s also about CGI.  So, if you’re into Oiled Brad Pitt and CGI, and you haven’t already seen Troy, you are in for a treat.  If you’re into Greek mythology and literature, you can hope for a good laugh.

Why Watch it Today?: Those who study ancient Greek know that March 4th is “Exelauno Day” (a cheesy pun: the verb “exelauno” means “I march forth”).  Watch a movie about ancient Greeks (or CGI comrades of Brad Pitt) marching forth to battle.  Don’t worry, it won’t spoil the book — essentially the only people to survive both Troy and The Iliad are Aeneas and Odysseus (Sean Bean, in perhaps his first role to survive to the end of the movie).  Maybe they were trying to set up a sequel (Ithaca?) to compete with the ridiculous Armand Assante Odyssey miniseries…