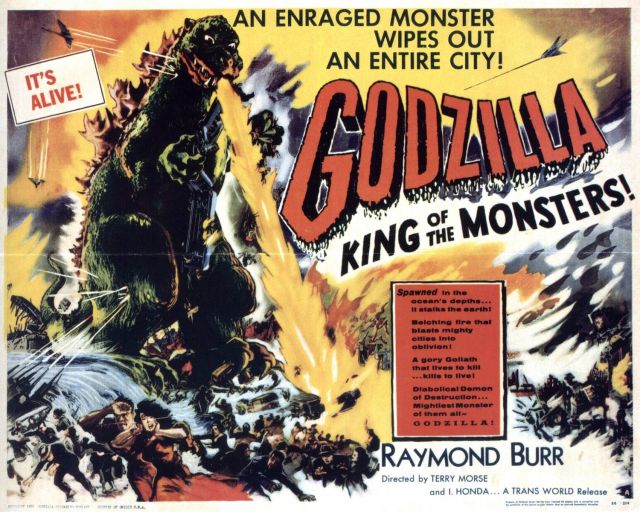 What It’s About:  Reporter Steve Martin (Raymond Burr) stops in Japan on route to Cairo to meet an old friend, Dr. Daisuke Serizawa (Akihiko Hirata).  The visit puts him on the scene to report on the biggest story of all time-a series of ship disappearances in the Pacific that leads to the discover-and a devastating encounter with-an enormous, radiation breathing behemoth dubbed Godzilla.  Martin’s saying a prayer for the whole world that it can be stopped…but will it be answered?

Why Watch it Today?:  All week we are featuring Godzilla movies in honor of Friday’s premier of the latest Godzilla movie. Even though I’ve previously featured the original cut of Gojira, I still would recommend watching this one.  The first reason is so you can see this film as Americans first saw it-which will make you appreciate why most Godzilla fans detest this cut and love that we can now see the original.  American producers went for the lowest common denominator and quickly and cheaply adapted this politically charged movie for an American audience by adding in newly shot scenes with Raymond Burr and a translator who helps out because elf Martin’s “rusty Japanese.”  The result is a lot of scenes where Martin talks to the back of the head of the main characters, observes their love triangle from afar, and important plot points are relayed to us via interpreter.  It’s an unusual trick to use, but it’s important to remember that relatively few movies were imported to the U.S. at this time and even fewer from Asia.  The effect is distracting at best, but most Kaiju fans object most strenuously for the change in tone-quite a few scenes critical of the United States, or which reference our war and atom bombs, are removed or changed.  The story loses much of its allegorical power and becomes more like the kind of atomic monster movies being released in the U.S. in the 1950s-trading on fears of the bomb, but not doubting the righteousness of we who invented it.

While all these complaints are true, I retain an affection for the American cut for several reasons.  One is nostalgia-this is, after all, the Godzilla I grew up with; I wasn’t able to see the original film until I was in my early 20s.  More importantly, some of the added scenes with Burr really work because he sells his florid dialogue.  Burr was a seasoned B actor and treats the material seriously.  While I appreciate the Japanese Kaiju film as its own animal, I also love 1950s monster movies, and this is one of the best.   There is the interest in comparing the two films, of course, and the historical fact that this is the version older fans grew up with. The last reason is simple:  as much as I love Gojira, the film’s pace does drag for me during some of the many scenes of conferences and during Gojira’s rampage; as cool as it was to finally see scenes I’d seen stills of, like Godzilla taking on artillery, three really are only so many scenes needed to establish his invulnerability to attack.  This isn’t to say that these scenes aren’t worth seeing, but if you’ve seen both versions, Godzilla, King of the Monsters gives you a faster paced film that you can fill in the blanks on.  Today, of course, there’s an extra bonus:  you can compare how Americans adapted the concept to their cultural milieu then and now!