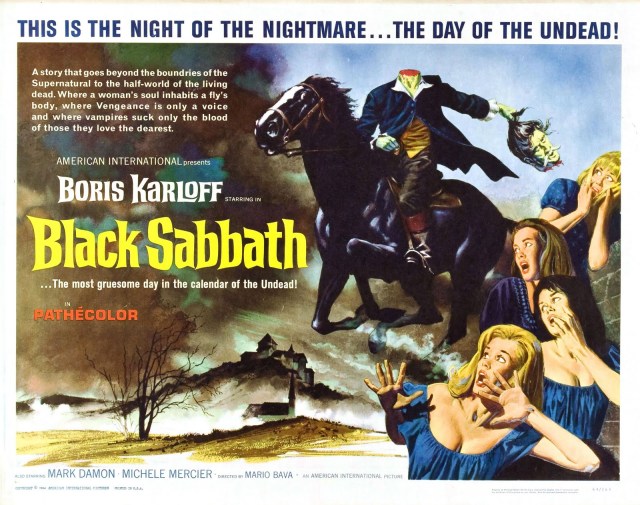 What It’s About: Boris Karloff introduces three tales of terror. In The Telephone a woman named Rosy (Michele Mercier) is getting ready for bed when she starts receiving creepy, sexual phone calls from Frank (Milo Quesada), an ex-lover that she sent to prison who recently escaped. The caller seems to know exactly what Rosy is doing at all times, so Rosy calls her ex-lover Mary (Lidia Alfonsi), who agrees to watch over her. Is Frank really at large?

The Wurdalak: Vladamir (Mark Damon), a traveler in rural 18th century Russia, finds a decapitated body on the road. At the nearest farm, he is told the body was a Wurdalak, a vampire that preys on those it loved most in life.  Gorca (Karloff), the patriarch of the farm, left five days earlier to slay the Wurdalak, instructing his family to kill him if he takes longer than five days to return.  When a pale, wounded Gorca arrives just after the stroke of midnight will the family have the strength to kill him? Can Vladamir lure Gorca’s beautiful daughter Sdenka (Susy Andersen), away from the family to safety?

The Drop of Water: A woman named Helen Chester (Jacqueline Pierreux) is called by a superstitious neighbor (Harriet Medin) to dress the corpse of the lady of her house. The lady was very old, friendless, and obsessed with spiritualism and seances, but Helen is not superstitious at all-and takes the opportunity to steal a ring from her corpse. Unfortunately, when Helen returns home to her apartment she finds that maybe she could have benefited from some superstition….

Why Watch it Today?: Mario Bava, the cult favorite Italian genre film director of the 50s-70s known for his eye-catching use of color and ability to create chills on a tiny budget, was born on this date 100 years ago.  Black Sabbath is best seen in the original Italian cut-AIP released it in English, scrambling the order of the stories (putting the last first, the first second, and the second third, and spoiling the gradual building of mood needed to make The Drop of Water work) and shooting new, inferior bookend segments with Boris Karloff and using a new lounge score by Les Baxter.

Other Choices: We’ve previously featured Bava’s classic gothic chiller Black Sunday,  his horror black comedy Hatchet for the Honeymoon and his trippy Lisa and the Devil as Movies of the Day and reviewed his Agatha Christie giallo variant 5 Dolls for an August Moon.