John Chisum (John Wayne, Rio Grande) is a heroic figure who carved a huge ranch in Lincoln County, New Mexico territory, fighting the native inhabitants, cattle rustlers and other criminals, and the harsh environment itself to do so.  He’s lasted through all of this turmoil, but now a new challenger has arrived in the form of Lawrence Murphy (Forrest Tucker, The Crawling Eye), a business man who is willing to do whatever it takes, from appointing a crooked sheriff (Bruce Cabot, King Kong) to murdering Chisum’s ally Henry Tunstall (Patric Knowles, How Green Was My Valley).  Chisum and his allies try to fight Murphy legally, but the murder of Tunstall sets off the troubled young man he took in: none other than Billy “the Kid” Bonney (Geoffrey Deuel), and Bonney isn’t about to wait for the law to handle things.  Will Chisum be able to stop Billy from starting an all out war in Lincoln County?

“Try to act casual, John, but your toupee is mussed and you got some catsup on yer lip”

Chisum was one of several later John Wayne films I saw (another was The Sons of Katie Elder) that convinced me that my father was nuts for loving John Wayne.  All were lesser Wayne films, made during the days when the paternalistic nature of his on-screen persona hit its peak, though before he started to really acknowledge just how old he was.  There’s a reason True Grit won Wayne an Oscar, and that reason was in that film he added a bit of insanity and drunkenness to his usual tough guy with a strong sense of what’s right and no inclination to refrain from lecturing you about it.  Wayne would go on to acknowledge his own mortality, playing (slightly) more flawed characters in films like The Cowboys and The Shootist, but for the most part he went on playing that same overbearing old fart who’s always right.

In addition to Wayne’s persona, these films often featured large casts of other old men who I simply did not recognize in my youth, not having grown up with their films. Now that, like the target audience for his films in the late 1960s and 1970s, I know who these old timers are, their presence adds a bit of amusement for me, but then it just meant scene after scene of fogies talking tough to each other or reminiscing about the old days before it was their turn to buy it.  Add in the fact that many of Wayne’s later films feature the competent but flat direction from directors like Henry Hathaway and Andrew V. McLaglen (son of frequent Wayne co-star Victor McLaglen and director of Mitchell, among other things), as well as Wayne’s own age, and you have a recipe guaranteed to bore a kid more used to the action and pacing of films from Clint Eastwood and Sergio Leone (and their imitators).  As I’ve gotten older I’ve learned to appreciate some of these films more than I did when I first saw them on TV growing up.  For one thing, I’ve more patience, but I’ve also gained a greater knowledge and appreciation of older Westerns and their stars, and it doesn’t hurt that I’ve seen a few later Wayne Westerns that might not hold up to the best from his prime, but which are still solid, entertaining films. 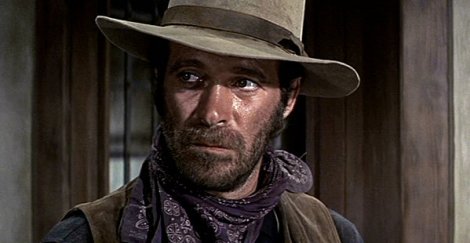 In my head the entire run-time: “My name is TUCKER and I’m a BAD MUTHA…“

Chisum isn’t one of these.  It’s a mediocre attempt to turn the Lincoln County War into an epic centered on one of its key figures, John Chisum.  Unfortunately, director McLaglen never manages to make this feel any more epic than a two-part episode of some long-lost TV show centered on Chisum and his ranch, which is hardly surprising considering McLaglen and writer/producer Andrew J. Fenady (The Man with Bogart’s Face) did a great deal of TV work, as did many cast members.  The action is anemic, the characters broad, and the meandering plot skips over the most interesting parts to come back to more scenes of Wayne.  Where else but in a late Wayne film would you get a bright-eyed and basically honest but wild Billy the Kid who gets little screen time?  Other than his eventual turning bad (defined here as “killing people in cold blood that Chisum would rather kill in a stand up fight”), Billy isn’t portrayed terribly differently than, say, Ricky Nelson’s character in Rio Bravo.  Pat Garrett (Glen Corbett, The Pirates of Blood River), eventually coupled with Chisum’s niece Sallie (Pamela McMyler, Halloween II), does present a contrast, a young man with a rough past ennobled through his association with Chisum, while we can only assume Billy’s inherent character flaws are what prevent him from doing the same.  The film’s conservative ethos is probably why it slaps a convenient happy ending on the story, ignoring history, in which Murphy survived, and after Chisum’s death of natural causes eventually “won” the Lincoln County War.  We can’t have cutthroat capitalist merchants beat out the rancher who the film spends so much time lauding for carving out an empire on the frontier, can we?  The less historically inaccurate out would have been to skip having Wayne (in some legendary bad stunt doubling) fist fighting Murphy during a stampede of cattle, and instead simply had Chisum die, leaving progress to lesser but more civilized men, better suited to the modern frontier where you take money and power any way you can.

That Billy, he’s such a doll.

The one real saving grace here is the large cast of Western regulars and character actors.  In addition to those already mentioned, we have Ben Johnson (Red Dawn) as Wayne’s right hand man; Christopher George (The Day of the Animals) as Dan Nodeen, a mean son-of-a-bitch bounty hunter turned sheriff with a grudge against Billy the Kid; Andrew Prine (Nightmare Circus) as McSweeny, a lawyer turned general store manager and Lynda Day George (It Happened at Lakewood Manor) as his wife; Richard Jaeckel (Latitude Zero) as one of Murphy’s goons; John Agar (Night Breed); and Hank Worden (3 Godfathers) as the stage manager.  Still, as much fun as it is to watch the overstuffed cast, Chisum is best skipped by all but the most hardcore Western and John Wayne fans, or perhaps film students seeking to see how greatly the depiction of Billy the Kid changes based upon the era and the nature of the filmmakers.  To anyone else this film will just confirm the often held prejudices of modern viewers against both Wayne and Westerns.