Dr. Decker (Michael Gough, The Horror of Dracula) returns to England from a year spent lost in Uganda after a plane crash.  He brings with him a chimpanzee named Konga, as well as secrets he learned from witch doctors.  It seems that certain insectivorous plants can produce a formula that can embiggen anything, and Decker begins to do just that, first with the aforementioned plants and then with Konga himself.  Before Decker can really get going and let his megalomania run wild, he’s several problems to deal with.  His assistant/housekeeper/mistress Margaret (Margo Johns) wants him to finally make an honest woman of her; his Dean (Austin Trevor, The Black Museum) wants to shut him down; a rival professor (George Pastell, The Mummy) is also researching the plants; and the nosey boyfriend (Jess Conrad, The Great Rock ‘n’ Roll Swindle) of the student (Claire Gordon) he is hoping to turn into his next assistant/housekeeper/mistress keeps getting in his way.  Decker’s response to each of these problems:  sick Konga, embiggened to gorilla size, on them.  There’s just one problem:  it’s never a good idea to spurn your assistant/housekeeper/mistress when she knows where you keep your chimpanzee embiggening formula.

Horror nerds of a certain age grew up reading  little orange and black books about movie monsters put out by Crestwood.  I can’t be sure at this late date if that is where I saw a single still of Konga, or if it was in another book about monster movies, but in any case, I most definitely saw it with the description that scientists created an ever-growing female chimpanzee that menaced Big Ben, a typically inaccurate description.  Konga joined my mental list of monster movies I should see sometime.  At some point I believe I saw part of it on AMC’s long gone American Pop program, which was essentially a drive-in movie or two with often hilarious shorts.  It didn’t make much of an impression, and somehow the basic idea of the film-Michael Gough as a murderous botanist!-seemed so amusing I had to give it a second shot.

This was a major mistake.  The film is every bit as boring as my cursory viewing of it years ago indicated.  A film that features a giant ape, carnivorous plants, and a mad scientist offing his rivals with a gorilla (sure, the film says “gorilla sized chimp” but that is George Barrows gorilla costume, not some newly made giant chimp suit) has no right being this dull.  It doesn’t help that the kaiju element is limited to the last 15 minutes or so, with Konga running through the streets holding Gough (points for novelty, there) until an infantry platoon shows up with a few machine guns and a couple of bazookas to finish poor Konga off.  Konga‘s  snail pace and  decided lack of tension or suspense are brutal, but worse, this isn’t really a Sci-Fi/Monster movie; for the most part this is a film about Gough being an ass and the odd relationship he has with Margaret. 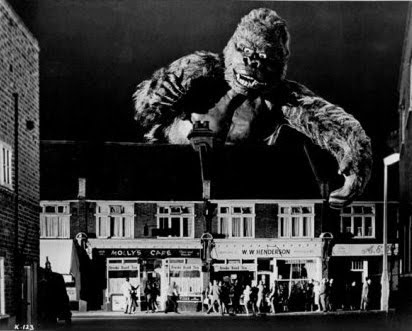 Gough and Johns are solid enough, but the rest of the cast is either given little to do but show up and die, or they’re terrible, as are the girl who Gough lusts after and her boyfriend.  It didn’t help that, for me, at least, Johns’ Tilda Swinton appeal trumped Claire Gordon’s….blondness?  I’m not sure what was supposed to be so appealing about her; certainly it wasn’t her hair, the hideous love child of a mullet and a beehive.  The effects are cheap but  not horribly done, with the exception of some of the inflatable “plants” and the scenes where Konga picks up humans (accomplished by having the guy in the gorilla suit hold silly little dolls) are beyond goofy.  I would give it a few points for its minor novel moments, but in the end, this is a film that should be avoided; the trailer is sure to show you all the best bits, and, beyond those bits, there really isn’t much worth watching.