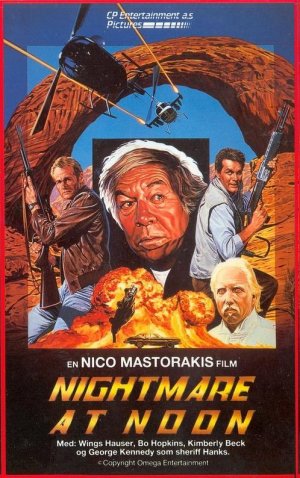 A mysterious albino (Brion James, Steel Dawn) and his goon squad arrive at a small southwestern town and infect the water supply with a virus that turns its victims into green blooded homicidal maniacs who will use anything-cars, guns, knives, fists-to attack everyone around them.  At the same time Ken Griffiths (Wings Hauser, Jo Jo Dancer, Your Life is Calling), is a yuppie music lawyer is travelling with his wife Cheri (Kimberly Beck, Massacre at Central High) in their Winnebago.  They pick up a hitchhiker with a past named Reilly (Bo Hopkins, White Lightning) and stop for breakfast at the local diner.  One crazed redneck later, they find themselves helping Sheriff Hanks (George Kennedy, The Concorde) deal with the increasingly violent residents of the town.  Can the unlikely heroes figure out what’s going on and stop it before the town goes up in flames?

“It was Citizen Kane!”

Nightmare at Noon is a strange animal.  It starts off as an 80s B-Action riff on George Romero’s The Crazies, with (carefully budgeted) gunplay, bravado, and character actors playing broadly sketched stereotypes approaching the situation in a straight forward fashion replacing Romero’s social commentary and ambiguity.  Then it shifts to referencing Westerns, as our heroes prepare for one last showdown with the Albino and his men in the mountains. 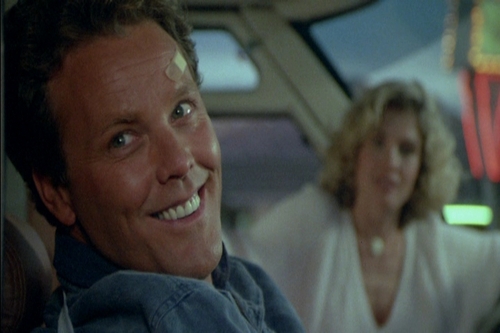 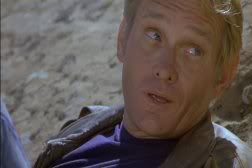 There’s also a sort of Red Dawn element to it all, with the second half revolving around our heroes taking the fight to their strongly implied to be Commie goon squad, complete with a helicopter chase that goes on and on.

“Together we fight green blooded raging rednecks infected with a Commie virus.”

I would recommend Nightmare at Noon more strongly if it didn’t have a momentum killing final act that demolishes the good will the film built up.  In the first two acts, Hauser, Hopkins, Kennedy, James and the rest of the cast hit exactly the right notes, and there is plenty of fun to be had.  It’s a real shame that the end is such a drag.  Still worth a look for hardcore cult movie fans, but those looking for a zombie movie or who don’t have the patience for a B-movie that plays the budget friendly padding card at the wrong moment shouldn’t seek it out.