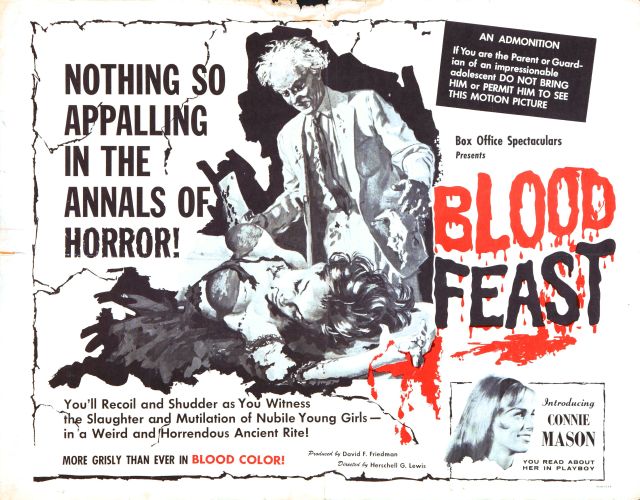 What It’s About:  Egyptian caterer Fuad Ramses (Mal Arnold) is putting the final touches on a feast that has been in preparation for “5,000 years!”, as he never ceases to inform us.  Unfortunately for the residents of Miami, these preparations include murdering beautiful women.  Can the two dim bulb detectives on Fuad’s trail stop him…before it’s too late?

Why Watch it Today?: In this legendary, hilariously trashy H.G. Lewis cheapie that is often credited with inventing gore (it surely didn’t, but it certainly popularized the selling of it to 1960s American drive-in audiences), Fuad is preparing a feast for Ishtar.  Blood Feast famously sickened audiences in 1963 just as Ishtar, the legendary bomb that attempted to revive (and politicize) the old Hope-Crosby road pictures with, of all people, Dustin Hoffman and Warren Beatty, released 26 years ago today, sickened critics and, arguably, the careers of everyone involved in it.