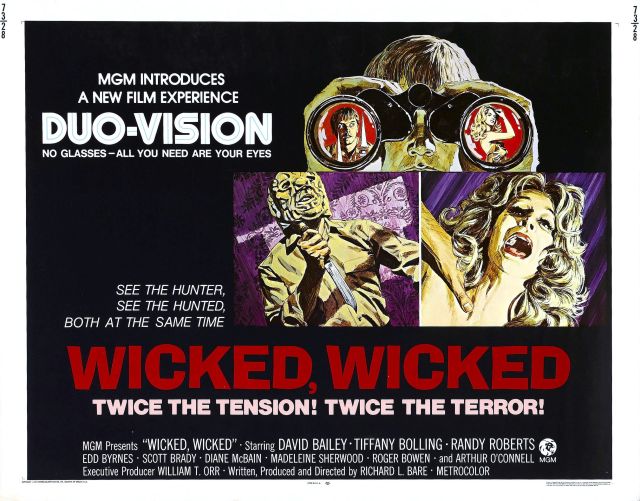 What It’s About: Hotel detective Joseph Grant (Randolph Roberts) is investigating the disappearance of several guests-they never checked out, they never paid their bills, and they can’t be found. They’re all pretty blonds…just like his old flame, singer Lisa James (Tiffany Bolling) who is just beginning her engagement as the hotel’s entertainment.  Can Grant get to the bottom of the case before it’s too late for Lisa?

Why Watch it Today?:  Wicked, Wicked was the only film shot in the “Duo Vision” gimmick-the entire film is split screen.  Sometimes one screen functions as a lie detector, showing what a suspect was really doing when they give their alibis; sometimes it’s a doorway into the inner life of the killer, showing us flashbacks that explain his psychosis; sometimes it’s a suspense generator, showing us the killer and victims actions simultaneously; and sometimes it’s just filler, like when an organist is shown playing parts of the Phantom of the Opera score, which the film draws inspirations from (as well as Grand Hotel as we follow the life of a large, if decaying hotel and its residents).  The first installment of The Phantom of the Opera was published today in 1909.  Wicked, WIcked is great when the gimmick works, but at times the film is half camp, half seriously creepy, though it’s 100% worth checking out.

Other Choices:  You could watch the 1925 Phantom of the Opera; Phantom of the Paradise, which came out a year later and uses split screen, though much more conservatively;  or you could just read the book.