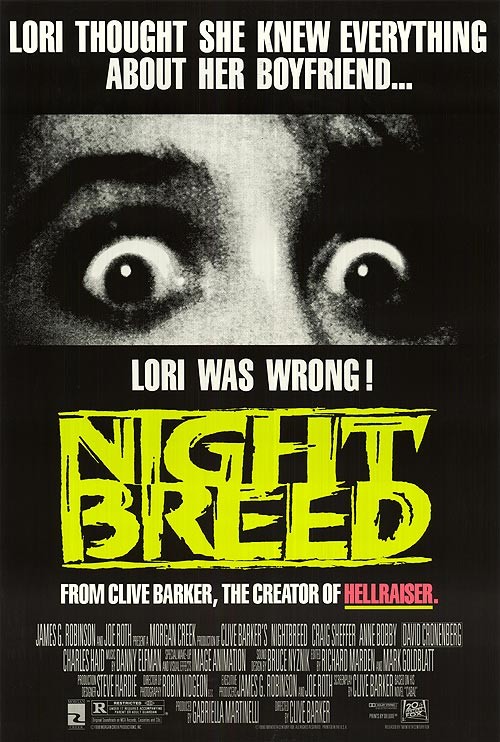 What It’s About:  Aaron Boone (Craig Sheffer) is a troubled youth who dreams of Midian, a place where he believes the monsters live and all sins are forgiven.  When Boone’s creepy psychologist Dr. Philip K. Decker (David Cronenberg) gives him hallucinogens, Boone winds up in a hospital psych ward, where he meets Narcisse (Hugh Ross), an actor who wants to kill himself because he can’t make it to Midian.  He knows where it is, and tells Boone, and then he begins to cut the skin off his own face.  Decker arrives with a police detective, Joyce (Hugh Quarshie) and Boone escapes in the confusion.  At Midian, he meets monsters-a red one with dreadlocks that wants to eat him, and a moon-faced one that warns it’s against the rules.  The red one bites Boone, but then the police show up, very heavily armed, and gun Boone down (after Decker claims Boone has a gun).  Boone wakes up in the morgue changed.  He is no longer “alive” in the human sense, and he escapes and makes his way back to Midian.  The society of freaks and outcasts that lives there is skeptical at first, but eventually initiates Boone into their group and he discovers his monstrous side that comes out when he’s angry.  Boone’s girlfriend Lori (Anne Bobby), confused about her boyfriend’s death and “disappearance” from the morgue, goes to the area Boone was found in to find out why he went there, finds Midian, and begins to complicate things….because Decker is following her, and he wants nothing more than to destroy Midian and is very good at manipulating the authorities into doing what he wants…

Why Watch it Today?: David Cronenberg, the Canadian director who went from directing low-budget gore fests like Rabid to higher end but still gory horror films like The Fly and finally into respectable (but usually still possessing some sharp edges) thrillers, turns 71 today.  You might wonder why I didn’t pick one of his films to highlight on his birthday.  The answer is pretty simple:  Cronenberg isn’t a great actor, but, in his few roles, is often a wonderfully strange and creepy screen presence, and no more so than here, where his Decker is more disturbing than any latex faced monster.  A happy birthday to a man whose work gets under my skin like few others can.