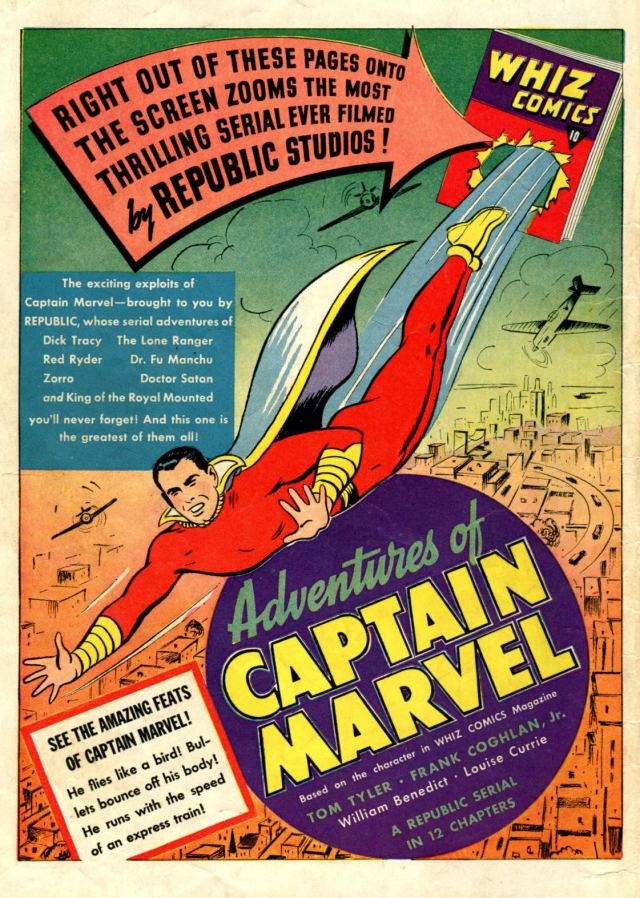 What It’s About: Cub reporter Billy Batson (Frank Coghlan Jr.) accompanies a scientific expedition to Siam.  There the wizard Shazam (Nigel De Brulier) grants Billy the ability to turn into the superhero Captain Marvel (Tom Tyler) so that Billy can protect the Golden Scorpion idol found on the expedition.  The scientists realize the idol is the most powerful weapon in the world and remove the lenses that power it, with the lenses distributed among the team to prevent any one member from using the idol.  When the team gets back to the States, a mysterious masked criminal who calls himself the Scorpion tries to get his hands on the five lenses.  Who is the Scorpion, and can Billy Batson/Captain Marvel stop him?

Why Watch it Today?:  Captain Marvel is one of the few popular superhero characters to be sued out of existence (at least, from 1952 until DC gained the rights and revived the character in 1972).  The hearing began today in 1951, with DC Comics successfully arguing that Fawcett’s Captain Marvel was an unlicensed copy of their own Superman.  It is a good thing the suit happened after today’s serial was made, as it is easily one of the best serials of all time, relatively free of repetition or water treading and packed with well mounted action and some excellent special effects for the time and budget.  This is the kind of serial that Spielberg and Lucas evoke in their films, especially Raiders of the Lost Ark.