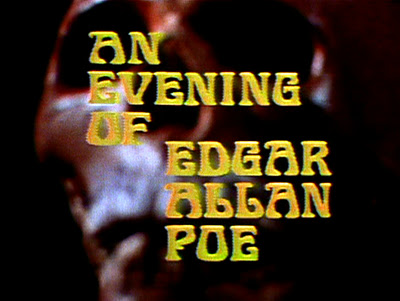 What It’s About: Vincent Price gives live readings of four Edgar Allan Poe stories-“The Tell-Tale Heart”, “The Sphinx“, “The Cask of Amontillado” and “The Pit and the Pendulum“.

Why Watch it Today?:  Edgar Allan Poe died today in 1849.  An Evening of Edgar Allan Poe was produced for television by AIP, the studio that produced all of Roger Corman’s 1960s Poe films.  Unlike those films, An Evening of Edgar Allan Poe presents Poe’s stories unaltered and enhanced only by lighting, a set, and Vincent Price’s fantastic dramatic readings.  While not a Poe film in the usual sense, it’s a fantastic way to experience the stories on their own and Price makes the most of the opportunity.  At under 60 minutes, it’s an excellent way to honor one of the most influential authors of horror fiction as well as start to get in the spirit of Halloween.

Other Choices:  We’ve previously featured many Poe adaptations, including both from AIP (The Masque of the Read Death, The Tomb of Ligeia, and Premature Burial) and Universal Studios (The Black Cat, The Raven, and Murders in the Rue Morgue).

No trailer, but watch the entire special below: