Here at the League of Dead Films, we like BEER!  In fact, I’m willing to bet that if we changed things up and started reviewing a different beer every day, we would have just as much insight and wisdom as we do about films — if not more.  Fortunately, there is a holiday that is all about beer, and for those of you who haven’t already been celebrating it for three weeks or so, it’s called Oktoberfest. 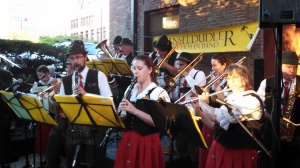 The German band at my local Oktoberfest

Oktoberfest has its origins in the biergartens of Munich, and the celebration apparently grew out of the nuptial festivities of King Louis I of Bavaria and his wife Therese in 1810.  More than two hundred years later, drinking enormous steins of beer is still popular.  Amazing, isn’t it?

What might surprise you more is the fact that German cuisine today isn’t only about beer and wurst.  It also has sauerbraten, traditionally made from horsemeat!  If you’d like to make some of your own at home, here’s a modern recipe (if you have leftover gingerbread, you know, lying around) or a nineteenth century one for the fermented-foods enthusiasts out there.  Nothing like a big pot of horseflesh in vinegar sitting around the house.

To be serious, though, fine cuisine can be found in Germany, and today’s Movie of the Day takes us behind the scenes with a story of an ambitious chef facing new challenges from big changes in her personal life when she becomes the guardian of her young niece.  For whatever reason, Hollywood put out an English-language remake of the movie in 2007 (No Reservations, starring Catherine Zeta-Jones and Aaron Eckhart).  But presuming you can read subtitles, the German original is a fresh, positive rom-dram that’s worth watching over your hefeweizen.

What It’s About: Driven German chef has life, motherhood and love thrust upon her.

Why Watch it Today?: Oktoberfest!!!  In honor of which, here’s the German trailer:

I’m going to go ahead and add this to the list of leather-pants movies, which has been on hiatus for a while.  There aren’t leather pants in the movie, but Oktoberfest is a great holiday for leather pants: that’s the literal translation of Lederhosen!  Plus, better that than having to watch The Fifth Element or something.