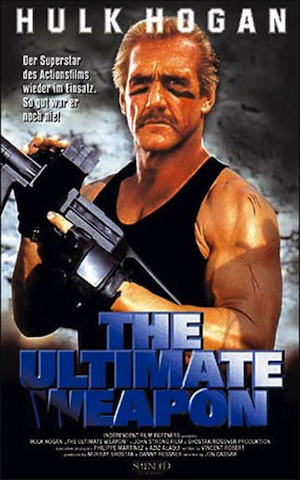 The South Shore Movie Guild meets typically once a month, usually to watch something in the horror/sci-fi/action genres in quality running from high (usually a horror movie) to abjectly terrible (usually when we watch action).  The group’s been running for years now, starting as a weekly horror movie night in October between a co-worker and I and then expanding to four members and meeting once a month (except in October, where we keep up the weekly tradition).  Last night we had our December meeting, which some how ended up being The Ultimate Weapon.  The Ultimate Weapon is a fairly typical late 90s direct to video action film, the kind of fare you might see on basic cable or, say, a Saturday afternoon playing on a local UHF station like Boston’s very own TV38. The plot is very typical of the time.  Hulk Hogan (Rocky III) is “Hardball” Cutter, a mercenary is tired of his lifestyle and is experiencing nightmares about being killed while trying to protect his estranged daughter Mary Kate (Cynthia Preston, Prom Night III).  His ex-wife drank herself to death; his current girlfriend Lorrie (Lynne Adams) wants him to give up his profession before he gets killed like his old partner “Cobra”. “Hardball” rejects her demands to quit and takes another job from “Top” Drummond (Vlasta Vrana, Happy Birthday to Me).  Paired with “Cobra”‘s son Dean (Carl Marotte, i.e. the goofy New Wave  guy from My Bloody Valentine), “Top” sends “Hardball” to secure a cache of arms in the hands of Serbian warlords and hand them over to an unarmed UN team lead by McBride (Daniel Pilon, sporting the world’s worst braided pony tail).  “Hardball” realizes that McBride is actually a member of the IRA, and, at the last-minute, decides to finally do the right thing, blowing up the cache of arms and leaving McBride behind in Serbia.  The result of his fit of conscience is a blood feud, with angry IRA terrorists attempting to get to “Hardball” through his daughter and girlfriend.

As an action movie, The Ultimate Weapon isn’t too exciting.  The plot meanders (though the pacing is never deadly slow), the bad guys lack menace, the good guys cool, and there aren’t much in the way of dramatic stakes.  As a dumb movie you watch while drinking a few beers with your friends, the fun really comes in a few key points: 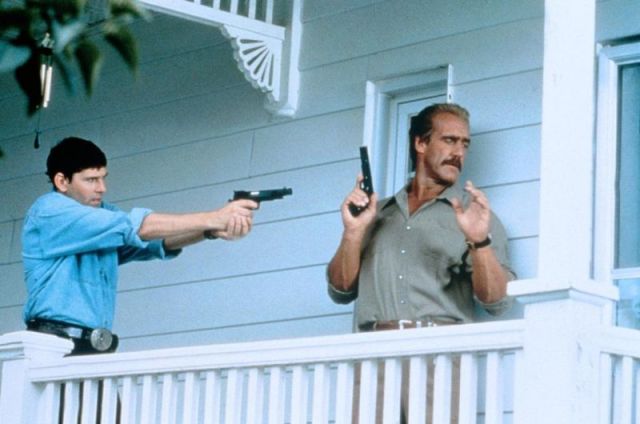 –The Ultimate Weapon tries and fails to disguise its Canadian origins.  Personally, I got a kick out of discovering a piece of Canuxploitation made this late in the game. If Marotte as an unlikely action hero doesn’t tip you off-seriously, how did this guy get the part?-then the accents on most of the supporting cast would do the trick (as would their film credits if you to look them up). Nerd that I am, I also noticed that the Hulkster and Marotte were sporting versions of the Canadian military’s standard issue side arm, the Browning Hi-Power, something I’ve never seen in an American action movie. The “U.S. Special Forces” uniforms in the opening training scenes also felt slightly off and a bit dated. In 1998, at least, Canadians were sporting helmets/uniforms very similar to the ones we were using in the early 80s. Viewers who didn’t spend their childhoods reading up on military equipment might also clue in to the terrible 90s casual fashions (the worst offender being a terrible bright yellow shirt Marotte dons for the climax) that I’m guessing were purchased at Roots (digging deep for the Canadian jokes here).  Indeed, most of the locations seem like the kind of semi-rural woodsy mansions with skiing lodge accents that you might expect low-end Canadian film producers to own.  The buildings feature a lot of unpainted wood and stone,  with accessories and features sure to be “Late 20th Century cool” in another 30 years or so when inevitably rediscover the era’s design and architectural choices. 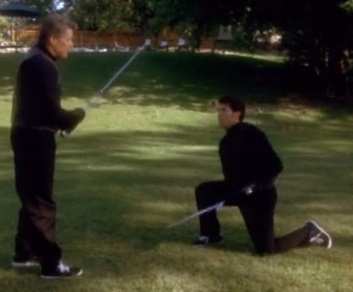 -The “IRA” guys don’t try to have Irish accents, which, living on the Irish Riviera like I do, amuses me. Their Irishness is confined to the fact that they train with broadswords (???) which I assume means the filmmakers learned about Ireland from watching Highlander (even though, yes, I know, that was Scotland). The scene where the lead bad guy and his goon practice in all black outfits with a leather vest and, as one of the SSMG’s esteemed members put it “Larry David sneakers” has to be seen to be believed. It’s a shame this isn’t actually Hulk Hogan vs. the Irish Ninja.  The only person who has an accent is Mary Kate’s caretaker Mrs. Neely (Sheena Larkin, Visiting Hours, born in Northern Ireland) and her accent is never spoken of. 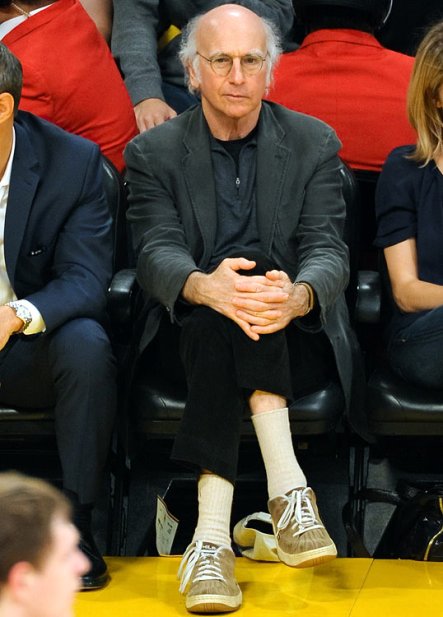 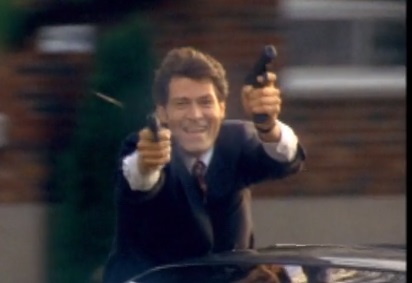 -Mary Kate is on hard times and turns to that beloved film profession, the stripper that doesn’t actually remove her clothes. This results in an extremely uncomfortable sequence where Hogan tracks her down and watches most of her act, as well as us meeting a Roots-casual Canadian pimp, which is basically just a sketchy balding white guy who comes up with elaborate, easily seen through ruses to convince girls to go on “dates” with rich old men.  Mary Kate treats us to some of the least erotic, most off rhythm dancing I’ve ever seen in a film (and I’ve watched the scene where the music isn’t synced to the dancers in Blacula 3 or 4 times!). Finally, Cynthia Preston looks vaguely like Taylor Swift (we dubbed her “Taylor Swift’s Mom”), especially in the final act of the film, which we really should have taken more advantage of-I strongly suggest anyone who watches this one based on this post to do so.  Especially if you actually know her songs well enough to do it well. 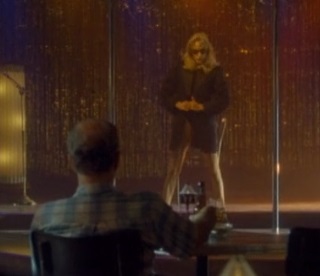 –The Ultimate Weapon features the worst proposal for marriage that’s not meant to be comedic or depressing I’ve ever seen. Do not ask Terry “Hulk” Hogan to deliver romantic dialogue convincingly (though to give the Hulkster his due, the writing is awful); having him do so while Lorrie is sitting at a potter’s wheel, vaguely evoking Ghost merely emphasizes how terrible it all is. 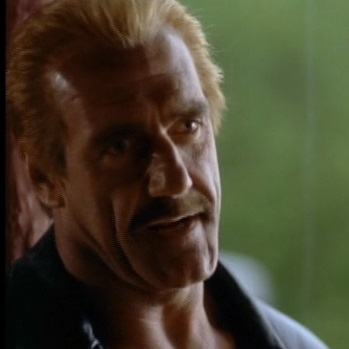 -The lead bad guy belongs to the “Millionaire’s Club”, which, even in 1998, seems less of a sign of great wealth and more like a sad thing to make the most successful landscaper in town feel like he’s Daddy Warbucks.  Making matters worse, we are talking about Canadian money here.  In 1998 the Canadian dollar hit a record low-68.79 American cents-so the “millionaires” in question are more like “700,000-aires” and that’s being generous.  Either way they are entry-level 1% at best. 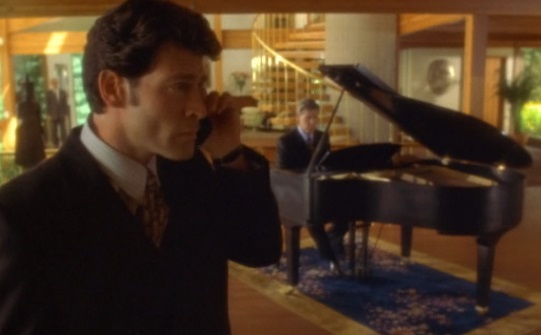 -At one point the bad guys try to kill Hulk’s gf with the fumes from a wood stove. Now That’s Canuxploitation! 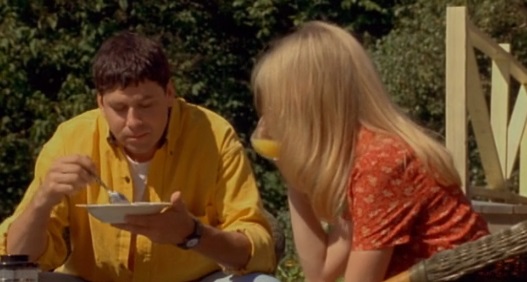 “The very finest in Canadian style”

This post undoubtedly makes The Ultimate Weapon sound far more amusing than the direct to video schlock that it is, but in the right mind-set (and a few friends) it is enjoyably mediocre.  I also want to be clear-I am only kidding Canada because I love Canada (many summer vacations in my childhood were spent in PEI, Nova Scotia, Quebec or Ontario, partly to explore my mother’s family’s Canadian roots) and because I am deeply envious of their healthcare and comparatively sane political system.