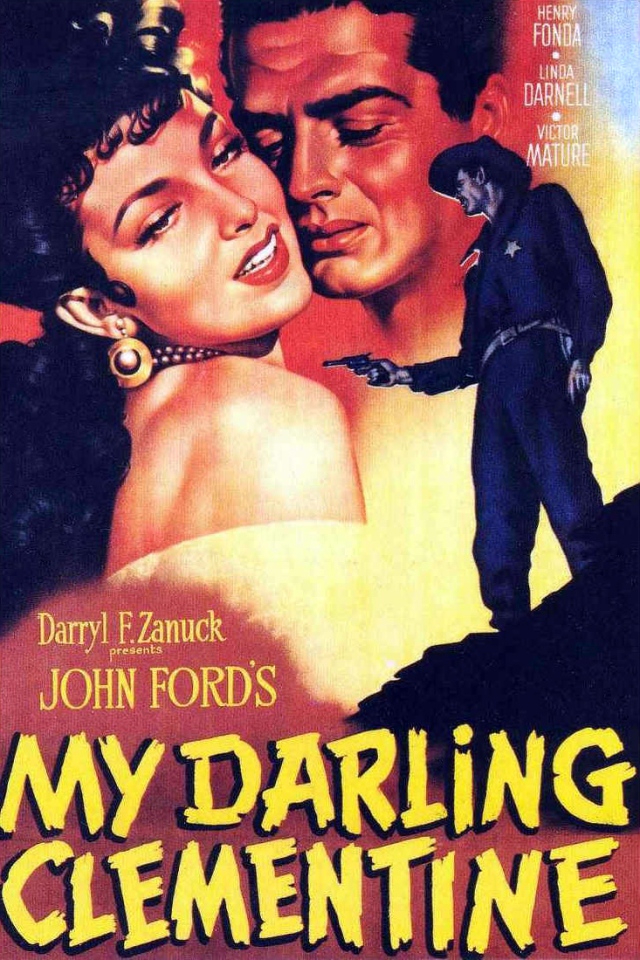 When the Earp brothers-Wyatt (Henry Fonda, Tentacles), Virgil (Tim Holt, The Monster that Challenged the World), Morgan (Ward Bond, Three Godfathers) and youngest brother James (Don Garner)-stop their cattle drive to take a rest, they meet Old Man Clanton (Walter Brennan, To Have and Have Not) and his sons Billy (John Ireland, I Saw What You Did), Ike (Grant Withers, Fort Apache), Phin (Fred Libby, She Wore a Yellow Ribbon) and Sam (Mickey Simpson, Stagecoach).  Old Man Clanton tells the Earps that they’ll never get their cattle to California and offers to buy them at a cut-rate price; when Wyatt refuses, Clanton suggests the Earps go into nearby Tombstone to relax.  The three oldest brothers leave James behind and venture into Tombstone, where they find an out of control town.  When a drunk gunman interrupts Wyatt’s shave and the marshal refuses to handle the situation, Wyatt takes matters into his own hands, bringing an offer from the mayor (Roy Roberts, House of Wax) to be Tombstone’s new marshal. 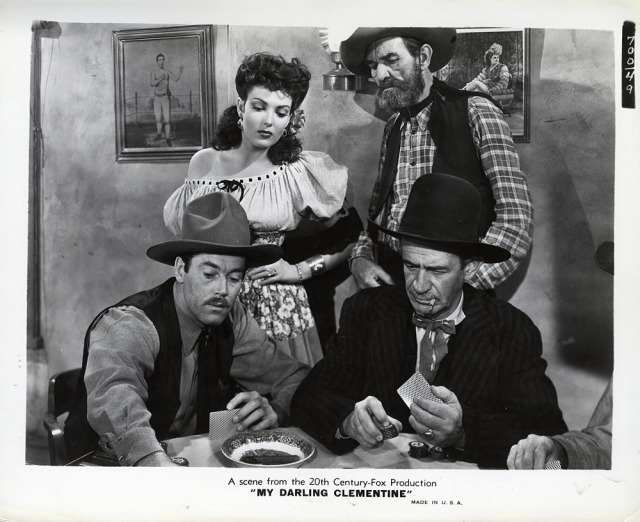 Wyatt refuses, but when the Earps return to their camp to find James dead and their cattle stolen, Wyatt changes his mind and takes the mayor up on his offer.  Along with his two brothers, Earp begins to clean up the town, but trouble comes in several forms.  Doc Holliday (Victor Mature, The Glory Brigade), who runs gambling in the town, returns, and begins an unsteady friendship with Wyatt.  The arrival of Holliday’s old flame from back East, Clementine Carter (Cathy Downs, The She Creature) sets in motion the events that finally bring the Clantons , Earps and Doc to their legendary gunfight at the O.K. Corral. 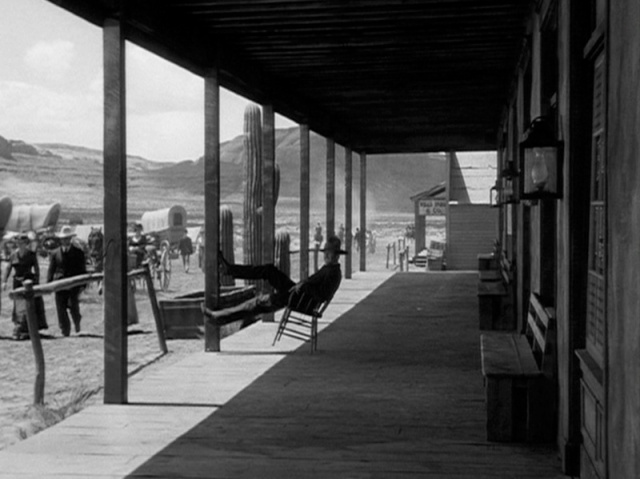 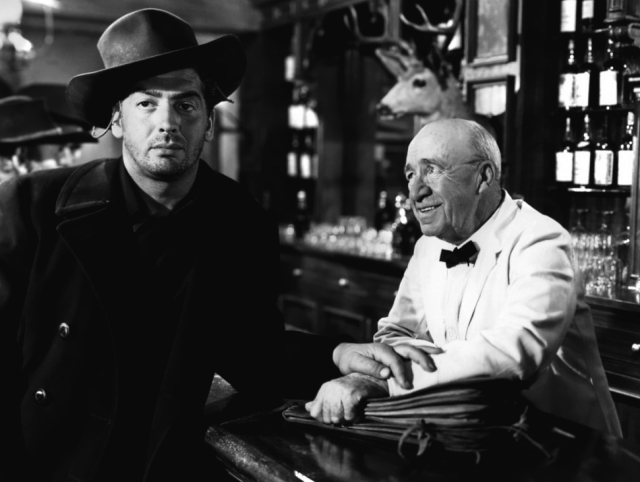 Doc’s holding up pretty good against that TB, huh?

My Darling Clementine is one of John Ford’s few Westerns that does not feature John Wayne, the U.S. Cavalry, or conflict with American Indians, concentrating instead on the Earps taming Tombstone as well as the relationship between Wyatt and Doc.  There’s also the little matter of the love triangle between Wyatt, Doc, and Clementine, or really square, when we figure in Doc’s girl in town and symbol of his fall from his educated Eastern origins, singer and saloon girl Chihuahua (Linda Darnell).  In many ways the women are more representative of Ford’s themes of the coming of civilization and the old, rough and ready, corrupt but beautiful and fiery frontier days of the West.  At times the film plays like a bizarre Western Casablanca, with the heart of a supposedly cynical bar/gambling club owner melting with the arrival of an old flame that reminds him of his past.  The conflict between the Earps and the Clantons is pushed to the background and the focus is on the two men and their always tense friendship, the lawman and the dashing but haunted and tubercular gambler, heading for an inevitable confrontation. 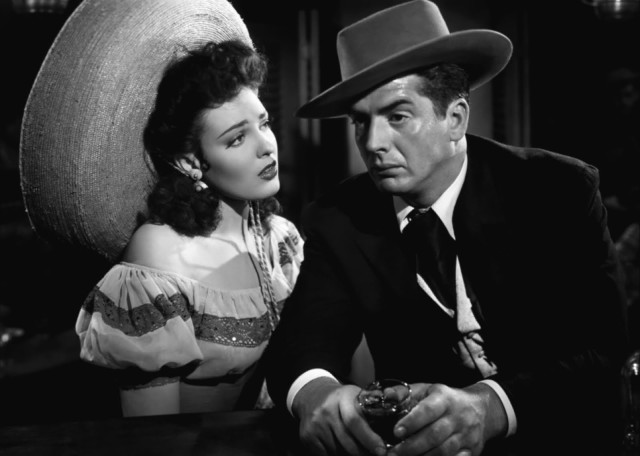 The conflict with the Clantons leads to the final showdown, and directs the violence not between the leads, but between them and an even  less civilized force, an unruly pack lead by the sadistic Old Man Clanton, who uses a whip to keep his brood in order.  When the gunfight is over, the Clantons are vanquished and Holliday and Chihuahua are dead; they can no longer live in the town, which the Earps have made fit for civilization in the form of visits by actors, Sunday services, and Clementine staying on to become the town’s new schoolmarm.  The pre-release version features the ending that Ford intended and producer Daryl F. Zanuck (How Green Was My Valley) changed.  Ford’s ending leaves Wyatt promising to return to Tombstone to visit Clementine in her schoolhouse; it is a sweet, but very chaste ending which leaves the future a little unsettled; Zanuck’s ending adds a new close-up shot of Wyatt giving Clementine a peck on the cheek.  I prefer Ford’s ending; it, like his longer cuts with more personality, less scoring and more natural sounds, gives the film a real slice-of-life feel, fleshing out the town and the background characters and including the small details of daily life. 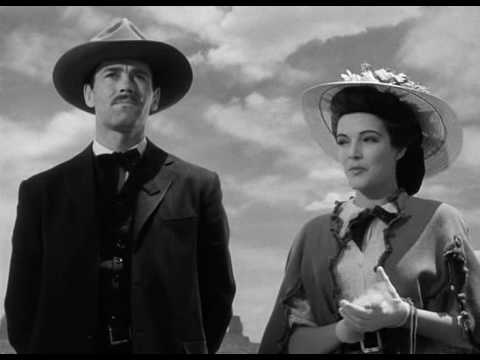 Ford can say all he wants about the relative merits of Clementine over Chihuhua, I know which one I’d pick. 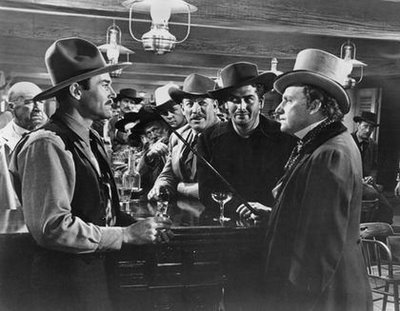 My Darling Clementine is a John Ford original, a retelling of the famous story of the O.K. Corral, Tombstone, and Earp and Holliday by slowly developing the characters and setting, with some of its strongest scenes being quiet moments, such as when Doc Holliday and Wyatt Earp save an English thespian (Alan Mowbray, My Man Godfrey) from the Clantons, who are forcing him to perform Hamlet’s famous monologue about death.  We see Holliday’s face, the face of a man haunted not only by his own impending demise, but also the events that led him to abandon the role he prepared to fill in the East and become a gunslinger and gambler.  In these scenes it is easy to forget the incongruous sight of the famously beefy Mature playing a man dying of tuberculosis. 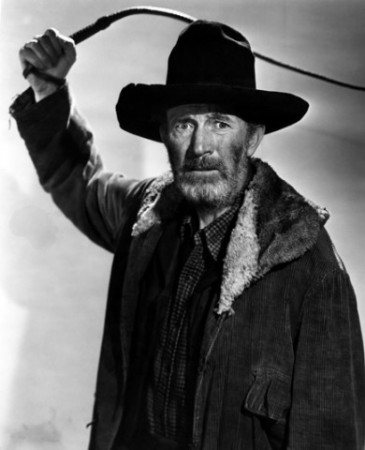 “Say, was you ever stung by a dead bee? How bout a whip?”

Ford’s stock company is fine as usual, with Ward Bond stealing the occasional scene as the always hungry Morgan Earp, while Henry Fonda’s Wyatt is all deliberation and restraint.  Brennan, mostly known for playing lovable old timers, is a revelation as Old Man Clanton, an abusive father and calculating, two-faced opponent.  The opening scene where he sizes up the Earps, then sends them away so he can rustle their cattle and kill their youngest brother is chilling, as is his cold-blooded actions later in the film.  Linda Darnell deserves credit as well, successfully taking her Chihuahua from a stereotype fiery Latina to a sympathetic figure when she does the right thing, pays for it, and then bravely faces surgery on a makeshift barroom operating table without anesthetic. 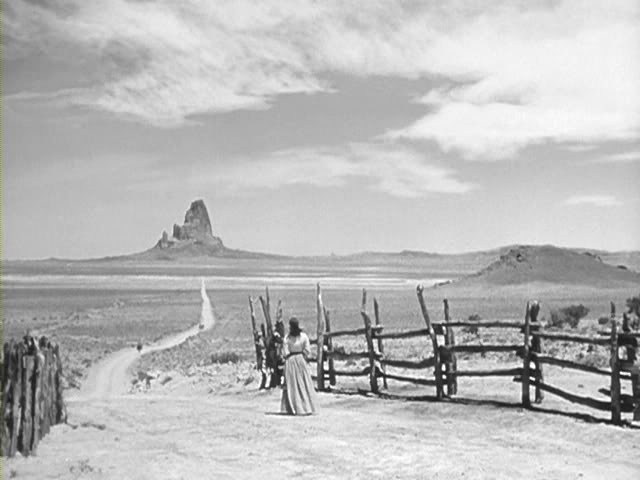 My Darling Clementine is beautifully shot in the very richest black and white, with wonderful use of shadows and darkness, and features some of the Ford’s trademark Monument Valley scenery and dynamic scenes of men racing on horseback and in stagecoaches.  The only real downsides are the pacing (you will be disappointed if you go in expecting an action-packed “shoot-em’up”) and some of Ford’s attitudes which reflect the prejudices of the times.  My Darling Clementine is a must see for fans of John Ford and anyone interested in classic Westerns.