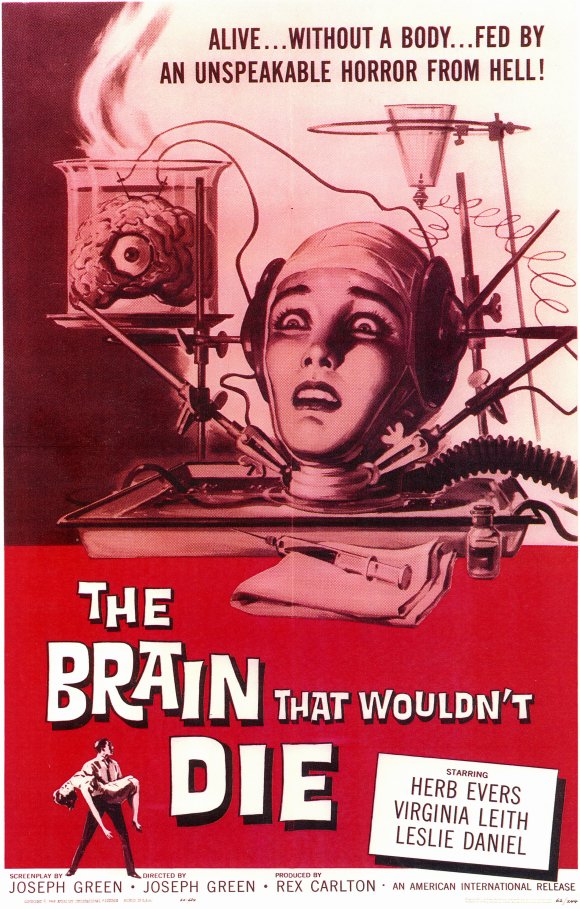 What It’s About: Doctor Bill Cortner (Jason Evers) is a maverick, working outside of regulations on organ transplanting.  When his nurse (and fiancé) Jan Compton (Virginia Leith) is decapitated in an auto accident on the way to his secret lab, Dr. Cortner scoops up her head, puts it in a pan of preservative fluid, and begins looking for a replacement body.  Jan, meanwhile, laments her new status as “Jan in the Pan” and plots with one of Cortner’s other failed experiments, hoping to unleash it to kill Dr. Cortner and  his melodramatic assistant Kurt (Leslie Daniels).

Why Watch it Today?: Eyes Without a Face premiered on this date in 1960.  The unexpected international success of the film lead to imitators (such as Atom Age Vampire) and a brief vogue for (occasionally real) surgery scenes in mad scientist films.  Today’s movie is quite possibly the sleaziest of all of Eyes Without a Face‘s imitators,replacing that film’s beautiful but haunting images and strange father/daughter relationship with the unintentionally hilarious quest of an absolute dirt-bag to find a new, hotter body for his decapitated fiancé.  The result is a bad movie cult classic which inspired the likes of Re-Animator and Frankenhooker.